Discover the role mobile fundoscopy is playing in making it easier for EDs to confirm CRAO in this free ebook! 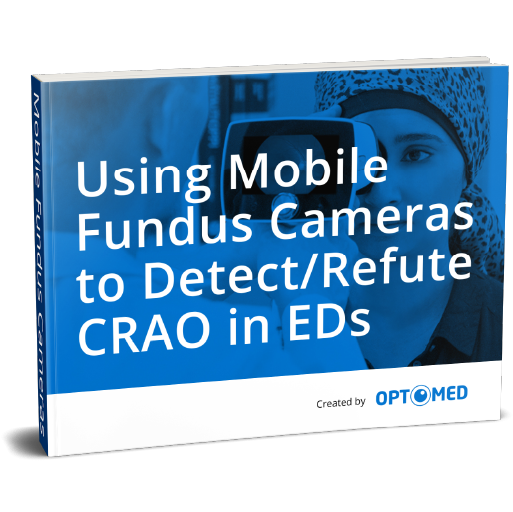 More than 2.2 billion people globally live with visual impairments, from mild symptoms to blindness. More than half of eye diseases, however, are preventable.

Central retinal artery occlusion (CRAO) is present in one out of every 100,000 people. The sudden block of the central retinal artery is a rapidly progressive disease that causes damage at the cellular level, resulting in retinal hypoperfusion and vision loss. When present, retinal survival depends on the level of collateralization and the duration of retinal ischemia.

Speed of CRAO Detection Is Crucial

The ability to rapidly identify CRAO and begin treatment to dislodge or lyse the embolus or thrombus is essential to prevent irreversible damage, including blindness. Speed of detection is crucial.

When patients present with warning signs of CRAO, such as sudden vision loss without an obvious injury or significant pain, they require immediate triage.

Speed of CRAO Treatment Is Essential

According to the American Heart Association, the current literature shows that treatment within 4.5 hours can lead to better outcomes.

Intravenous tissue plasminogen activator (tPA), commonly called a clot-buster, is used to treat brain strokes. tPA may be effective in treating patients with CRAO, but only if it is given within four and a half hours of the first sign of symptoms for safe and effective treatment. Delayed detection or treatment can lead to permanent vision problems, including permanent loss of vision.

“Central retinal artery occlusion is a cardiovascular problem disguised as an eye problem,” said Mac Grory. “It is less common than stroke affecting the brain but is a critical sign of ill health and requires immediate medical attention.”

CRAO can also be a warning sign of a significant stroke or another health risk. The risk of a subsequent stroke, myocardial infarction, and death increases when CRAO is present. For example, MRIs on CRAO patients revealed strokes in 37.3% of those studied.

“We’ve put so much value on protecting people’s vision with CRAO that we haven’t been screening for serious comorbid disease,” said Matthew Schrag, MD, assistant professor of vascular neurology at Vanderbilt. This is yet another indicator of the importance of early detection for CRAO patients.

The Challenges of Detecting CRAO in Emergency Departments

CRAO always needs to be treated as a medical emergency. However, many emergency departments (EDs) are unprepared or unequipped to provide the rapid detection that is needed. CRAO detection is often delayed because of one of two important factors:

“Because of the potential for future strokes or even heart attacks, patients should undergo urgent screening and treatment of vascular risk factors,” states the American Heart Association. “The complexities of diagnosing and treating CRAOs require a team of specialists working together.”

Yet, the team necessary is often unavailable immediately.

Since CRAO is a rare occurrence, it is neither practical nor cost-efficient for the ED to staff eye-care specialists 24/7. This can slow down detection. Even if ED staff members suspect CRAO, they may have to rely upon on-call specialists who may or may not be available within the critical time frame.

Detecting or refuting CRAO in emergency departments is also difficult when the technology for detection is unavailable. Not all hospitals and emergency care facilities have access to mobile fundoscopy for detection. Also, tabletop retinal cameras are bulky and require extensive training.

Many ED doctors say that they would welcome a better way to efficiently evaluate patients instead of direct ophthalmoscopy, which requires dilated pupils. Two of them are Dr. Jason Dimmig, an ophthalmologist, and Dr. Dustin Ballard, an emergency physician.

In an article that the two authored in Emergency Medicine News, the doctors recommended the non-mydriatic handheld fundus camera as the better solution. The direct ophthalmoscope can be difficult to use and inefficient at identifying signs of diabetic retinopathy or CRAO.

Recent studies have demonstrated that up to 40% of patients screened with a direct ophthalmoscope are misdiagnosed, even when screened under ideal conditions by trained ophthalmologists.

For years, physicians lacked a real alternative, in large part because they didn’t have practical tools. However, over the past two decades, technology has advanced considerably. Today’s mobile handheld fundus cameras are easy to use, produce high-quality images, and are easily attainable.

“The convergence of digital technologies (including the ability to photograph the fundus through the non-dilated pupil), the ease of viewing images in the ED, and being able to share images by telemedicine makes this technology an excellent ED option,” said Dimmig.

Drs. Dimmig and Ballard examined the evidence presented in a study looking at adults in the Emory University ED with fundus visualization complaints, such as headache, visual change, hypertensive urgency, and focal neurologic deficit. Emergency physicians examined patients while researchers took nondilated digital fundus photos, which were sent to neuro-ophthalmologists for further assessment.

Other significant findings from the study include:

The high sensitivity of digital fundus photography, the ease of visualizing the fundus without pupillary dilation, and the ability to share the images digitally for remote consultation are among the factors that make handheld fundus cameras ideal for the ED.

The two doctors also suggested that investment in a handheld non-mydriatic fundus camera can easily pay for itself in an ED setting in terms of legal protection for missing a diagnosis, especially when the potential for poor outcomes from CRAO is so high. A mobile fundus camera can help avoid those awkward conversations. “I think we can all agree that a fundus picture would be worth 1,000 words considering those painful phone consults with the eye doctor,” noted Dimmig.

Solutions for Detecting or Refuting CRAO in EDs

The most common cause of CRAO is an embolus dislodged from the carotid artery. Fundoscopy can detect or refute CRAO quickly.

Via mobile fundoscopy, CRAO detection can happen almost anywhere. A handheld mobile unit allows staff in EDs to go where patients are, rather than sending them to a special area or room. This speeds up detection as assessment, and triage can begin wherever it’s needed.

A fundoscopy can detect or refute CRAO by identifying the symptoms, including:

Using a fundoscopy, the vascular attenuation of flow in arteries or veins—slow segmental blood flow observed in retinal arterioles and veins, known as box carring—may also be evident.

CRAO May Not be Recognized without the Right Technology

According to Mac Grory, many practitioners may not recognize CRAO as a form of stroke, resulting in patients receiving delayed testing and treatment. The American Heart Association concurs: “Since eye strokes are less common, they are often not diagnosed quickly.”

This often means failing to treat it as the medical emergency that it is.

“Unfortunately, a CRAO is (also) a warning sign of other vascular issues,” said Mac Grory. “So ongoing follow-up is critical to prevent a future stroke or heart attack.”

The American Academy of Ophthalmology states that fundus photography is useful for documenting the severity of the retinal findings, vascular caliber, retinal hemorrhages, the presence and characteristics of intravascular emboli, and the presence of any new vessels in the retina or near the optic disc.

The Optomed Aurora is a highly sophisticated, handheld fundus camera that is affordable, easy to use, and on the cutting edge of retinal imaging. Optomed places the power to quickly and easily perform quality retinal imaging in the hands of non-eye-care specialists, including ED.

This technology also enables providers across the patient’s medical care spectrum to access and evaluate the Aurora’s retinal images. During the assessment, it is easy to capture high-quality digital images that can be shared with eye-care specialists or off-site referrals for further examination. Rather than waiting for specialists to arrive, a fast determination can occur so treatment can begin.

Studies have demonstrated that the imagery captured using a mobile handheld fundus camera is reliable for confirmation or exclusion of various ocular and systemic conditions, including CRAO.

The Aurora IQ seamlessly integrates artificial intelligence for even faster image analysis. The AI results can be read from the camera screen in seconds.

Optomed is a Finnish medical technology company and one of the leading providers of handheld fundus cameras. Optomed combines handheld cameras with software and artificial intelligence with the aim to transform the diagnostic process of blinding eye diseases such as rapidly increasing diabetic retinopathy and CRAO.

Optomed focuses on eye-screening devices and software solutions related to R&D in Finland and sales through different channels in more than sixty countries.

Patients experiencing CRAO need IV tPA within 4.5 hours for the best outcomes. That means you need to act FAST. Our mobile fundus cameras are easy to use for staff, enabling teams to easily confirm or refute CRAO in the ED. Digital image sharing helps emergency teams save critical time by streamlining communication.

Want to learn more about how we’re enabling neurologists, neuro-ophthalmologists, and emergency staff to confirm or refute CRAO faster and easier than ever? Schedule a free consultation today!